The Times of India
Advanced Search »
You are here: Home » Mocktale

Stories in Mocktale are works of fiction intended to bring a smile to your face. They bear no connection to events and characters in real life. 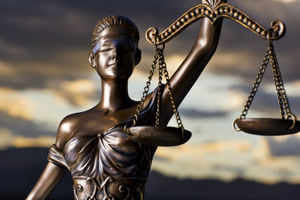 Statue of Justice (Thinkstock Photos/ Getty Images)
RELATED
Impressed with the speed at which journalists pronounce someone guilty, top jurists of the country are demanding that scribes be made judges at the apex and high courts. With the glaring examples of Badaun and Rohtak, the jurists believe this move will turn every court into a fast-track court.

"Both TV and print journalists have been doing an amazing job by pronouncing verdicts within hours of a case being reported. This hasn't happened before in the history of India," quipped senior lawyer Nam Rasmalani. "They were faster than lightning in pronouncing the three youths as molesters in the recent Rohtak incident. I support the move to name reputed journalists to the highest court of the country so that justice can be doled out impromptu," Rasmalani noted.

If the move succeeds, there will be no 'tahreek-pe-tahreek' said a member of the judiciary, quoting the immortal lines of Bollywood star Sunny Deol delivered as an on-screen lawyer. "Instant justice hoga aab. Very similar to what is delivered by our encounter specialists," she added. "This is indeed the silver bullet to tackle the issue of piling up of cases," she added.

Members of the media have welcomed the suggestion with open arms, which will soon become longer as they become law unto themselves.

"Judicial processes are so slow and boring. We will bring a revolution to the whole process with our specialisation of making anything sensational," said senior news anchor Barca That. "Whatever it is, I can assure you we won't lie law," said That.

Journalists, however, claimed they are prepared for the new role. "With experience of passing verdicts at prime time every night the country couldn't have found a better judge than me," asserted Orny Gosueme, adding "The nation wants to know why we weren't considered for the role earlier?"

"With Gosueme in the judge's high chair, lawyers would hardly get the chance to argue their case and it would save time. The verdict would be pre-decided and the pronouncement would take no time at all," said renowned public prosecutor Sonu Nikam. "Gosueme judgmental about everything," he quipped

Nikam said journalists are used to media trials and should be appointed judges. He pointed out the speed with which the media reached the conclusion that the Yadav brothers raped and murdered the two sisters in Badaun.

When Mocktale asked That what amicus curiae was, she said with her trademark I-know-it-all expression, "Amicus Curiae is the famous brother of Madam Curie."
पर दिसंबर 07, 2014