For other uses, see News (disambiguation). 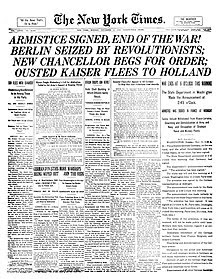 A newspaper is one of the most common ways to receive the latest news.
News is the communication of selected[1] information on current events. It is shared in various ways: among individuals and small groups (such as by word of mouth or newsletters); with wider audiences (such as by publishing, either in print or online, or broadcasting, such as on television or radio); or in ways that blend those traits (such as when social media sharing starts among individuals but goes viral).

The English word "news" developed in the 14th century as a special use of the plural form of "new".[2] In Middle English, the equivalent word was newes, like the French nouvelles and the German neues. Similar developments are found in the Slavic languages—the Czech and Slovak noviny (from nový, "new"), the cognate Polish nowiny and Russian novosti—and in the Celtic languages: the Welsh newyddion (from newydd) and the Cornish nowodhow (from nowydh).

Before the invention of newspapers in the early 17th century, official government bulletins and edicts were circulated at times in some centralized empires.[3]
The first documented use of an organized courier service for the diffusion of written documents is in Egypt, where Pharaohs used couriers for the diffusion of their decrees in the territory of the State (2400 BC).[4] This practice almost certainly has roots in the much older practice of oral messaging and may have been built on a pre-existing infrastructure.
In Ancient Rome, Acta Diurna, or government announcement bulletins, were made public by Julius Caesar. They were carved in metal or stone and posted in public places.
In China, early government-produced news sheets, called tipao, circulated among court officials during the late Han dynasty (second and third centuries AD). Between 713 and 734, the Kaiyuan Za Bao ("Bulletin of the Court") of the Chinese Tang Dynasty published government news; it was handwritten on silk and read by government officials. In 1582 there was the first reference to privately published newssheets in Beijing, during the late Ming Dynasty.[5]
In Early modern Europe, increased cross-border interaction created a rising need for information which was met by concise handwritten newssheets. In 1556, the government of Venice first published the monthly Notizie scritte, which cost one gazetta.[6] These avvisi were handwritten newsletters and used to convey political, military, and economic news quickly and efficiently to Italian cities (1500–1700)—sharing some characteristics of newspapers though usually not considered true newspapers.[7] Due to low literacy rates, news was at times disseminated by town criers.
Relation aller Fürnemmen und gedenckwürdigen Historien, from 1605, is recognized as the world's first newspaper.[8]
The oldest news agency is the Agence France-Presse (AFP).[9] It was founded in 1835 by a Parisian translator and advertising agent, Charles-Louis Havas as Agence Havas.
In modern times, printed news had to be phoned into a newsroom or brought there by a reporter, where it was typed and either transmitted over wire services or edited and manually set in type along with other news stories for a specific edition. Today, the term "breaking news" has become trite as commercial broadcasting United States cable news services that are available 24-hours a day use live satellite technology to bring current events into consumers' homes as the event occurs. Events that used to take hours or days to become common knowledge in towns or in nations are fed instantaneously to consumers via radio, television, mobile phone, and the Internet.

Main article: Newspaper
Most large cities in the United States historically had morning and afternoon newspapers. As the media evolved and news outlets increased to the point of near oversaturation, most afternoon newspapers were shut down. Morning newspapers have been gradually losing circulation, according to reports advanced by the papers themselves. Commonly, news content should contain the "Five Ws" (who, what, when, where, why, and also how) of an event. There should be no questions remaining. Newspapers normally place hard news stories on the first pages, so the most important information is at the beginning. Busy readers can read as little or as much as they desire. Local stations and networks with a set format must take news stories and break them down into the most important aspects due to time constraints. Cable news channels such as BBC News, Fox News, MSNBC, and CNN, are able to take advantage of a story, sacrificing other, decidedly less important stories, and giving as much detail about breaking news as possible.[citation needed]
News organizations are often expected to aim for objectivity; reporters claim to try to cover all sides of an issue without bias, as compared to commentators or analysts, who provide opinion or personal point of view. The result is a laying out of facts in a sterile, noncommittal manner, and then standing back to "let the reader decide" which view is true.[10] Several governments impose certain constraints or police news organizations against bias. In the United Kingdom, for example, limits are set by the government agency Ofcom, the Office of Communications. Both newspapers and broadcast news programs in the United States are generally expected to remain neutral and avoid bias except for clearly indicated editorial articles or segments. Many single-party governments have operated state-run news organizations, which may present the government's views.
Even in those situations where objectivity is expected, it is difficult to achieve, and individual journalists may fall foul of their own personal bias, or succumb to commercial or political pressure. Similarly, the objectivity of news organizations owned by conglomerated corporations fairly may be questioned, in light of the natural incentive for such groups to report news in a manner intended to advance the conglomerate's financial interests. Individuals and organizations who are the subject of news reports may use news management techniques to try to make a favourable impression.[11] Because each individual has a particular point of view, it is recognized that there can be no absolute objectivity in news reporting.[12]

Online journalism is news that is reported on the Internet. News can be delivered more quickly through this method of news. A common type of internet journalism is called blogging, which is a service of persistently written articles uploaded and written by one or more individuals.

Further information: News values
Newsworthiness is defined as a subject having sufficient relevance to the public or a special audience to warrant press attention or coverage.[13]
In some countries and at some points in history, what news media and the public have considered "newsworthy" has met different definitions, such as the notion of news values.[14] For example, mid-twentieth-century news reporting in the United States focused on political and local issues with important socio-economic impacts, such as the landing of a living person on the moon or the cold war. More recently, the focus similarly remains on political and local issues; however, the news mass media now comes under criticism for over-emphasis on "non-news" and "gossip" such as celebrities' personal social issues, local issues of little merit, as well as biased sensationalism of political topics such as terrorism and the economy. The dominance of celebrity and social news, the blurring of the boundary between news and reality shows and other popular culture, and the advent of citizen journalism may suggest that the nature of 'news' and news values are evolving and that traditional models of the news process are now only partially relevant.[15] Newsworthiness does not only depend on the topic, but also the presentation of the topic and the selection of information from that topic.

Michael Schudson, professor at the Columbia University Graduate School of Journalism, has said that "[e]verything we thought we once knew about journalism needs to be rethought in the Digital Age."[16] Today the work of journalism can be done from anywhere and done well. It requires no more than a reporter and a laptop. In that way, journalistic authority seems to have become more individual- and less institution-based. But does the individual reporter always have to be an actual journalist? Or can journalistic work be done from anywhere and by anyone? These are questions that refer to the core of journalistic practice and the definition of "news" itself. As Schudson has given emphasis to, the answer is not easily found; "the ground journalists walk upon is shaking, and the experience for both those who work in the field and those on the outside studying it is dizzying".[16]
Schudson has identified the following six specific areas where the ecology of news in his opinion has changed:
These alterations inevitably have fundamental ramifications for the contemporary ecology of news. "The boundaries of journalism, which just a few years ago seemed relatively clear, and permanent, have become less distinct, and this blurring, while potentially the foundation of progress even as it is the source of risk, has given rise to a new set of journalistic principles and practices",[18] Schudson puts it. It is indeed complex, but it seems to be the future.