From Wikipedia, the free encyclopedia
Jump to: navigation, search
For other uses, see Freelance (disambiguation).
A freelancer, freelance worker, or freelance is somebody who is self-employed and is not committed to a particular employer long term. These workers are often represented by a company or an agency that resells their labor and that of others to its clients with or without project management and labor contributed by its regular employees. Others are completely independent. "Independent contractor" would be the term used in a higher register of English.
Fields where freelancing is common include: music, journalism, publishing, screenwriting, filmmaking, acting, photojournalism, cosmetics, fragrances, editing, photography, event planning, event management, copy editing, proofreading, indexing, copywriting, computer programming, web design, graphic design, website development, consulting, tour guiding, video editing, video production and translating and illustrating.
Freelance practice varies greatly. Some require clients to sign written contracts, while others may perform work based on verbal agreements, perhaps enforceable through the very nature of the work. Some freelancers may provide written estimates of work and request deposits from clients.
Payment for freelance work also varies greatly. Freelancers may charge by the day, hour, a piece rate, or on a per-project basis. Instead of a flat rate or fee, some freelancers have adopted a value-based pricing method based on the perceived value of the results to the client. By custom, payment arrangements may be upfront, percentage upfront, or upon completion. For more complex projects, a contract may set a payment schedule based on milestones or outcomes.
In writing and other artistic fields, "freelance" and its derivative terms are often reserved for workers who create works on their own initiative, then look for someone to publish them. They typically keep the copyright to their works and sell the rights to publishers in time-limited contracts. In contrast, intellectual property created under a work for hire situation according to the publishers' or other customers' specifications are referred to as "independent contractors" and similar terms. They have no copyright to the works, which are written as works made for hire, a category of intellectual property defined in US copyright law — Section 101, Copyright Act of 1976 (17 USC §101). This is the opposite of the situation with a regular employee, the relationship between a freelancer and an employer being that between two business equals, the protections of the intellectual property rights that naturally vest in the creator of the work are considered to have been sold in toto in the work for hire agreement.

The term was first used by Sir Walter Scott (1771–1832) in Ivanhoe (1820) to describe a "medieval mercenary warrior" or "free-lance" (indicating that the lance is not sworn to any lord's services, not that the lance is available free of charge).[1] It changed to a figurative noun around the 1860s and was recognized as a verb in 1903 by authorities in etymology such as the Oxford English Dictionary. Only in modern times has the term morphed from a noun (a freelance) into an adjective (a freelance journalist), a verb (a journalist who freelances) and an adverb (she worked freelance), as well as into the noun "freelancer".

According to the Bureau of Labor Statistics of the U.S. Department of Labor, in 2005 approximately 10.3 million workers in the US (7.4% of the US workforce) were independent contractors.[2]

Freelancers generally enjoy a greater variety of assignments than in regular employment, and—subject to the need to earn a regular income—usually have more freedom to choose their work schedule.[citation needed] The experience can also lead to a broad portfolio of work and the establishment of a network of clients.
Sometimes a freelancer will work with one or more other freelancers and/or vendors to form a "virtual agency" to serve a particular client's needs for short-term and permanent project work. This versatile agency model can help a freelancer land jobs that require targeted, specific experience and skills outside the scope of one individual. As the clients change, so too may the players chosen for a virtual agency's talent base. This is a common way for freelancers to get work if the non-competing freelancer in the relationship reciprocates the relevant type of work back assuming that both are in the same industry.[citation needed]
Freelancers and clients may form a relationship based on mutual needs and the professionalism and competence of both parties.


Impact of the Internet

Modern-day Freelance Work System
The Internet has opened up many freelance opportunities, expanded available markets, and has contributed to service sector growth in many economies.[3] Offshore outsourcing, Online outsourcing and crowdsourcing are heavily reliant on the Internet to provide economical access to remote workers, and frequently leverage technology to manage workflow to and from the employer. Much computer freelance work is being outsourced to poorer countries outside the United States and Europe. Online freelance marketplaces are websites that match buyers and sellers of services provided via the internet. Buyers bid on services at a fixed price or an hourly rate.
The Internet also enables many freelancers to be interviewed and hired without actually meeting an employer in person. This facilitates long distance business relationships all over the world, but can provide a challenge in screening applicants. Hiring more than one applicant for a short test assignment after the interview is now a common extra step in the hiring process.[citation needed]
Freelance employment has been common in the areas of writing, editing, translation, indexing, software development, website design, advertising, open innovations, information technology, and business process outsourcing. Freelance journalists, for example, may find it easier to start their own or shared news blogs, with many blogs growing into highly-trafficked and competitive news sites capable of hiring dedicated staff and other talent.
Changes to the publishing industry since the 1980s have resulted in an increase in copy editing of book and journal manuscripts and proofreading of typeset manuscripts being outsourced to freelance copy editors and proofreaders. 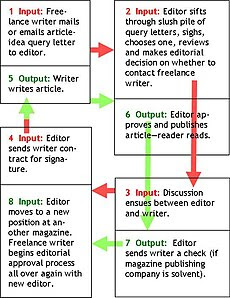 Traditional Freelance Work System
The major drawback is the uncertainty of work and hence income, and in lack of employment benefits such as a pension, sick leave, paid holidays and bonuses or health insurance, especially in countries lacking a system of universal health care. Many freelancers, especially in journalism, regard themselves as having greater income security through the diversity of outlets—the loss of any one of which leads to the loss of only a portion of income, rather than its totality as with salaried employees.
Author and poet Ernest William Hornung (1866–1921) used the term in "The Gift of the Emperor" to describe his woeful state as a freelancer in those days, "I warmed to my woes. It was no easy matter to keep your end up as a raw freelance of letters; for my part, I was afraid I wrote neither well enough nor ill enough for success."

Many periodicals and newspapers offer the option of ghost signing, when a freelance writer signs with an editor but their name is not listed on the byline of their article(s). This allows the writer to receive benefits while still being classified as a freelancer, and independent of any set organization. In some countries this can lead to taxation issues (e.g., so-called IR35 violations in the UK). Ghost signing has little bearing on whether a writer is a freelancer or employee in the US.
Freelancers often must handle contracts, legal issues, accounting, marketing, and other business functions by themselves. If they do choose to pay for professional services, they can sometimes turn into significant out-of-pocket expenses. Working hours can extend beyond the standard working day and working week.
In Europe, the perceived disadvantages of being freelance have led the European Union to research the area, producing draft papers that would, if enforced, make it illegal for companies or organizations to employ freelancers directly, unless the freelancer was entitled to benefits such as pension contributions and holiday pay. In the UK, where the terms of integration into the EU have and are being hotly debated, this would lead to a significant reshaping of the way freelance work is dealt with and have a major impact on industry; employers would be required either to give freelances the contractual rights of employees or employ only freelancers already being employed by agencies or other organizations granting them these rights. However, the White Papers that recommend such moves have not yet been adopted in the EU, and the potential impact on UK employment laws is being opposed by key UK organizations lobbying the government to negotiate over the acceptance of EU legislation in such areas.[citation needed] The legal definition of a sole trader requires that he/she must have more than one client or customer which promotes the freelancing ethos.
In the U.S. in 2009, federal and state agencies began increasing their oversight of freelancers and other workers employers classify as independent contractors. The U.S. Government Accountability Office (GAO)[4] recommended that the Secretary of Labor have its Wage and Hour Division "focus on misclassification of employees as independent contractors during targeted investigations." The increased regulation is meant to ensure workers are treated fairly and that companies are not misclassifying workers as independent contractors to avoid paying appropriate employment taxes and contributions to workers’ compensation and unemployment compensation.
At the same time, this increased enforcement is affecting companies whose business models are based on using non-employee workers, as well as independent professionals who have chosen to work as independent contractors. For example, book publishing companies have traditionally outsourced certain tasks like indexing and proofreading to individuals working as independent contractors. Self-employed accountants and attorneys have traditionally hired out their services to accounting and law firms needing assistance. The U.S. Internal Revenue Service[5] offers some guidance on what constitutes self-employment, but states have enacted stricter laws to address how independent contractors should be defined. For example, a Massachusetts law[6] states that companies can hire independent contractors only to perform work that is "outside the usual course of business of the employer," meaning workers working on the company's core business must be classified as employees. According to this statute,[7] a software engineering firm cannot outsource work to a software engineering consultant, without hiring the consultant as an employee. The firm could, however, hire an independent contractor working as an electrician, interior decorator, or painter. This raises questions about the common practice of consulting, because a company would typically hire a management consulting firm or self-employed consultant to address business-specific needs that are not "outside the usual course of business of the employer."