A Short History of Print Media

Filed under: Uncategorized — sophiewillborn @ 12:29 am and
It’s safe to say that advertising, the media, even life itself, would not be the same without the printed word. We learn about our world through shared writings: newspapers, magazines, and books. We decide what we want to buy from looking through advertisements that come in the mail. Printed media has shaped the way we learn, think, and act in modern society.
Yet it all began simply. Ts’ai Lun, a Chinese official, is attributed with the invention of paper in A.D. 105. Forty years later, Pi Sheng would invent the first movable type. It would take literally hundreds of years later, in 1276, for printing to reach Europe in the form of a paper mill in Italy, and another two hundred years until Johannes Gutenburg refined a method to efficiently print books and pamphlets on his Gutenburg press. 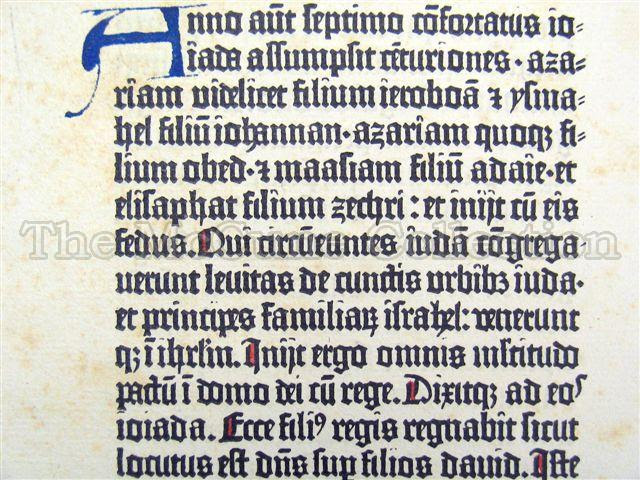 Metal type
Following the printing press, the next improvements in print media came through the developments of different typefaces. Nicolas Jenson invented a “Roman” typeface for publications around 1470, one that was far easier to read than the blackletter typefaces Gutenburg had used, which had copied the handwritten books of the time. In 1530, Claude Garamond opened the first type foundry. After Garamond’s death in 1561, his typefaces (in the form of punches and matrixes) were sold and distributed across Europe, popularizing his designs. 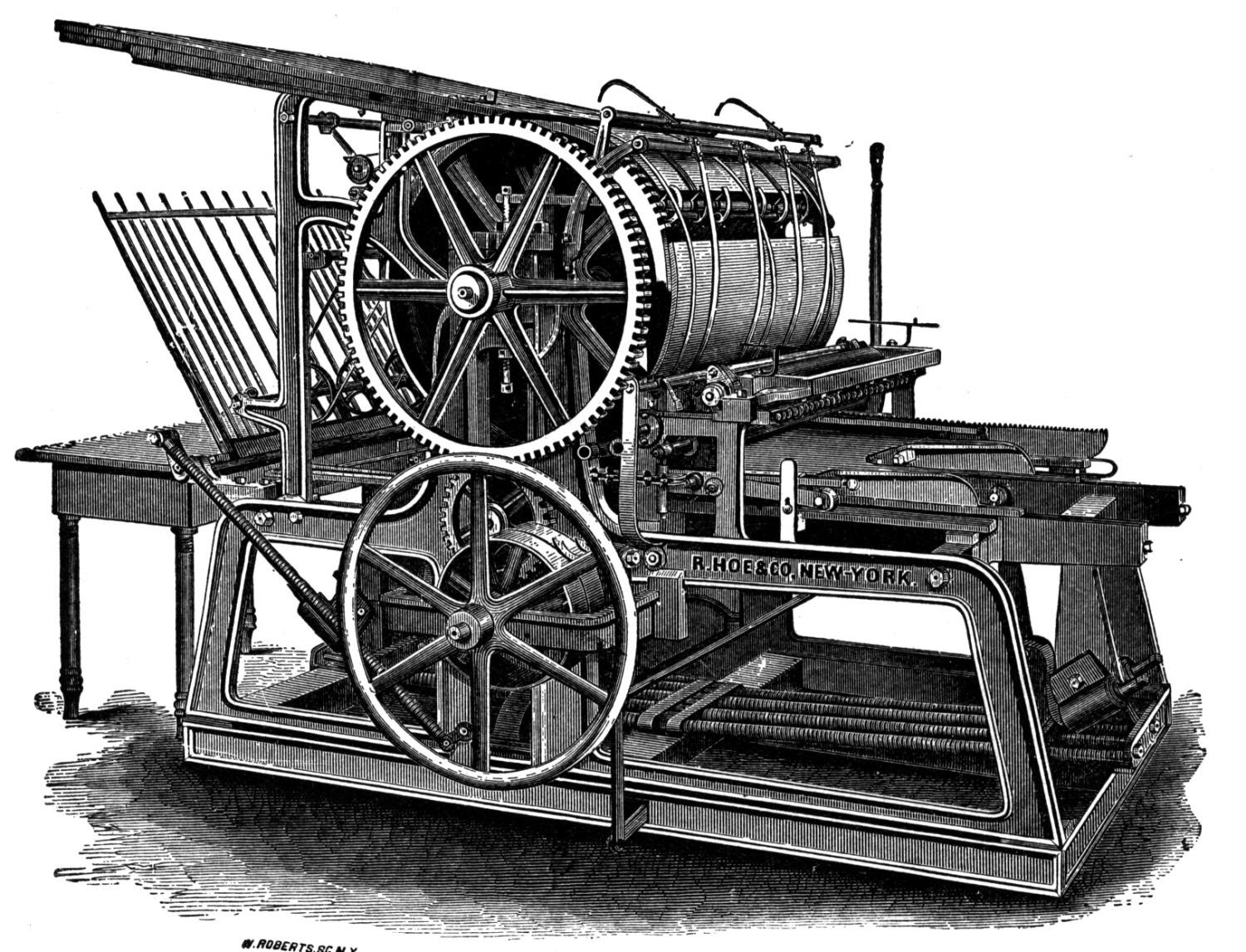 The Industrial Revolution would usher in a new era for type and publication, particularly with Lord Stanhope’s invention of the first all cast-iron printing press, doubling the usable paper size and drastically reducing the use of manual labor.
In 1880 the halftone process was developed, allowing for the first photo to be printed in a range of full tones. This in turn introduced a wave of sensationalist tabloids and the launch of a new craze: celebrities. Tabloids like the New York Daily News and the New York Daily Mirror published photo spreads (sometimes real, sometimes composographs, or manipulations) of stars like Rudolph Valentino, with immense success.

Composograph of Rudolph Valentino
The late 19th century and the beginning of the 20th century were an important time for print media and graphic design. Movements in style and technology would propel the print world into the modern age. The Art Nouveau movement began in 1890 and began an influence that would rule over all types of design, from layout to fonts to illustrations. Some companies that fueled the popularization of the style, like Liberty & Co. (Liberty of London), live on in modern society, still in vogue. The movements’ weight in print media is seen primarily in the posters of the period, characterized with lavish curves, leaf and plant motifs centered around beautiful women, flowers or birds.

Example of an Art Noveau style poster.
Also in the late 1800’s began the rise of media barons in the print industry. Men like Joseph Pulitzer and William Randolph Hearst would run publishing companies which proved that there was a profit in advertising and journalism. Both Pulitzer and Hearst would go on to have political careers. Even when fierce competitions rose between print houses and newspapers, it only seemed to stir the public’s interest and the popularity of print media.
In 1935 the electric typewriter came onto the market. After World War II, these typewriters would become tremendously popular, in both the personal and business worlds, changing the way people wrote forever. Some typewriters accommodated different fonts with exchangeable cartridges, and offered variable leading.
Typefaces and fonts continued to evolve in the 20th century as the first extended font families (which would include different variations of a particular font) were developed. This trend started with Cheltenham (developed by Bertram Grosvenor Goodhue, Ingalls Kimballin and Morris Fuller Benton in 1902-1913), and later examples include typefaces like Futura (designed in 1927 by Paul Renner) and Lucida (designed by Charles Bigelow and Kris Holmes in 1985). 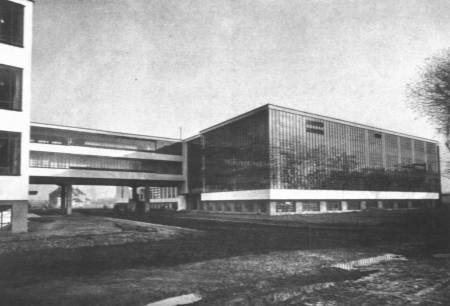 The Bauhaus in Germany.
An important institution in the media world during the beginning of the 20th century was the Bauhaus in Germany. The first of the modern art schools that would produce the new centuries’ designers, dancers, and engineers, the Bauhaus’ professors and alumni would include numerous graphic artists working in print media. Typography and color theory would be explored at the Bauhaus throughout its existence. In the late 1900’s, after the rise of the communist party in Germany prompted the dissolution of the Bauhaus itself, the name would be immortalized in a typeface developed by  Edward Benguiat and Victor Caruso, based on an earlier font created by the Bauhaus graduate Herbert Bayer.
Understandably, the digitalization of design would irrevocably affect print media. As computers took over more of the modern workload and graphic design began to shift into the computer world in the 1960’s, great changes were set in motion. Type design’s evolution would continue, no longer being hand cut or mechanically cast, but instead digitized character by character as either a bitmap or outline (vector) computer file. Companies like General Electric realized early on that computer graphics would give them an edge in advertising, and subsequently IBM released the first commercially available graphics computer, starting a cycle that would keep designers and computer manufacturers interlocked as both grew and began to expand. As new software and computers were released, more businesses started converting to digital advertising, and designers began taking advantage of the new products to do their jobs.

LIFE magazine.
Although digital design and the computer age have been blamed for negatively affecting print media, in some ways it has only made the print world stronger. Print houses for magazines and newspapers would be unable to publish relevant stories and photos fast enough without the advances in software that allow designers to complete their jobs and meet publication deadlines. Computer software has even made print media more accessible to small business owners and companies than ever before. Even with the advent of the world-wide web and online blogs and news sites, the printed word has not lost its power. Ad campaigns assail us from our mailboxes, from store-front windows and are handed to us by salesmen. We perhaps take for granted the hundreds of years of development that led to our perfectly leaded and kerned newspaper headlines and the bright color photos blazoned underneath. Print media has evolved continuously over its long history, and hasn’t stopped yet.
Bibliography
“A Graphic Design Primer.” History of Design. http://www.designhistory.org/
“About the Designer.” Lino Type. http://www.linotype.com/414/claudegaramond.html garamond info
“History.” Bauhaus Archive Museum. http://www.bauhaus.de/bauhaus1919/vorgeschichte1919.html the bauhaus
“Key Moments in Graphic Design History Timeline.” About.com.  http://graphicdesign.about.com/od/history/a/timeline1.htm
“Newspapers: A Brief History.” World Association of Newspapers. http://www.wan-press.org/print.php3?id_article=2821
Piechota, Irene. “Means of human communication though time.” http://myweb.cwpost.liu.edu/paievoli/finals/505Sp_03/Prj1/irene_piechota.htm
“The Liberty Story: Early Years.” Liberty of London. http://www.liberty.co.uk/fcp/content/AboutLiberty/content
Pictures
Picture of Gutenburg Bible page. The McCune collection. http://www.mccunecollection.org/images/Incunabula%20Styles/1450%20Johann%20Gutenberg.%20Mainz,%20Germany.%20Biblia%20Latina.[006].jpg
Picture of industrialized printing press. http://evolvingworld.wordpress.com/2010/05/26/unprinting/
Picture of Rudolph Valentino composograph. Streible, Dan. http://blogs.nyu.edu/blogs/ds169/nonfictionfilmhistory/2009/01/the_creative_treatment_and_act.html
Picture of Art Noveau Poster. http://cerriousdesign.com/catalog/index.php?main_page=product_info&cPath=6&products_id=39
Picture of the Bauhaus. http://www.writedesignonline.com/history-culture/bauhaus.htm
Picture of Life magazine. http://magculture.com/blog/?p=726\
Comments (1)
प्रस्तुतकर्ता ASBAbalnews.blogsport.com पर 3:22 am